All-in-one fly fishing combos sound like a fantastic idea, right? You get a rod, reel, line, and even leader all in one neat package. The problem, though, is that often one – or all – of those pieces of gear is subpar, especially if you’re buying gear on a budget. However, there are some great deals out there. So if you’re looking for the best fly fishing combo under 300 dollars, then grab a beverage and read carefully through these recommendations.

How to find the best fly fishing combo under 300 dollars

Often, when I get asked to recommend fly rods at the lower price points, I have to qualify my suggestions. The rod is good, but it’s a bit heavy, or, the swing weight is bad, but it’ll protect a light tippet.

That’s what you have to expect when you’re looking for a rod-and-reel combo that falls below the $300 mark. Or at least, it used to be.

With recent advances in fly rod building technology, and the increased capabilities of companies to produce quality die-cast reels as a cheaper alternative to ones machined from aluminum, there’s no shortage of great rod-and-reel combos on the market.

With that said, though, you’ll still trade off a few features for the cheaper price. Often, the line you get in these combos isn’t that great, and the reels are heavy. The rods themselves tend to be pretty good fishing tools on their own.

What this all comes down to is that you should expect to get something good, but not spectacular, for $300 or less. I’d suggest picking one thing about your combo you don’t want to sacrifice on – like having a lightweight rod – and then be willing to let the other stuff go.

Now, let’s get on to the meat and potatoes of this post – the best fly fishing combo under 300 dollars. 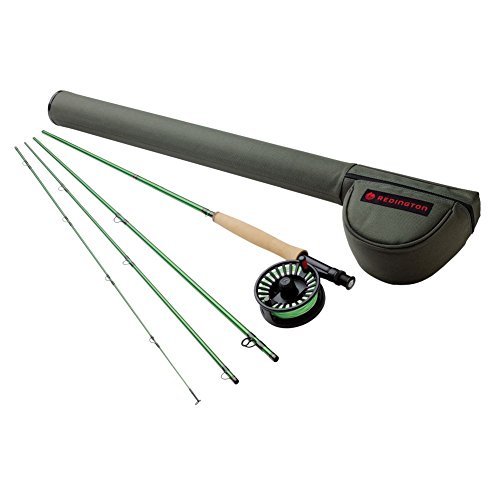 The Redington Vice is the best fly fishing combo under 300 bucks. It comes in various line weights, but all models are 9 feet long. I’d recommend you consider the 5 and 6wt versions the closest. These are your do-all rod weights.

The Vice combo comes with the Redington i.D. reel, which is heavier than I’d like, but it’s a solid piece of equipment. For 99% of your trout fishing, the i.D. reel has plenty of stopping power.

This combo does come with a lifetime warranty, which is something you don’t usually find on rods with a sub-$300 price tag. But Redington is well-known for warrantying most of their rods and reels, and the Vice is no exception.

Now, the Vice rod is a fast-action stick that doesn’t have near the tip sensitivity I really like in my rods. However, the tip isn’t so stiff that I’d worry about breaking light tippet, unless you’re really horsing in a fish.

The fast-action helps turn over big bugs well, and the Vice fishes decently against the wind. I’ve fished a Vice against some stiff Wyoming winds, and was pleasantly surprised at how it handled.

And, if you’re newer to fly fishing, it’s often easier to learn to fly cast on a fast-action rod. While I prefer slower-action rods, there’s nothing wrong with the quickness of the Vice.

In all, if you’re looking for the best fly fishing combo under 300 bucks, I don’t know where else to tell you to look other than at this Redington Vice.

That being said, I do have one other suggestion . . . 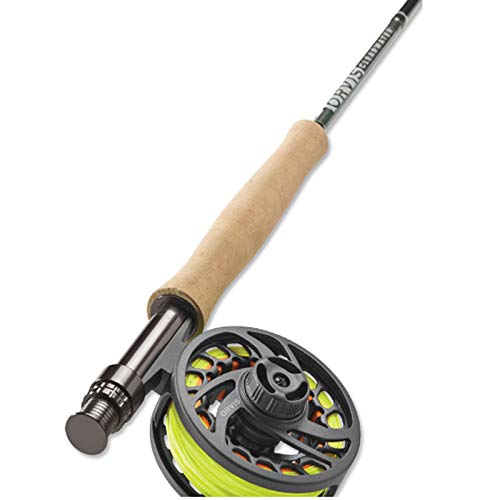 Orvis makes some of the best fly rods on the planet (their Helios 3 series is fantastic) and they’ve recently redesigned most of the rods in their lineup. The Clearwater rod-and-reel combo clocks in at just over $300, but it’s worth the extra money.

I reviewed this rod when it first came out, and I was immediately blown away at the quality. The build quality is phenomenal, which is to be expected from Orvis. But on a rod that comes with a reel and line for $309? It’s a cut above the rest.

The Clearwater has a more progressively-fast action, starting fast in close and slowing up the further you cast. The tip is incredibly sensitive and soft, but not so much that your casts don’t end up where you want them. Whether I’m fishing dry flies or streamers, the 9′ 5wt Clearwater has always come through with flying colors.

And that’s not even taking into consideration the bomb-proof drag of the Clearwater II reel. This reel is cast aluminum, so it’s heavier than I’d like. However, the drag is rock-solid and stops fish dead in their tracks. It has a bit of startup inertia, so you don’t want it cranked up high to start, but you can definitely turn it up to put the brakes on a hot trout.

In all, if I had to recommend one fly rod around the $300 mark, instead of below it, I’d highly suggest the Orvis Clearwater. But, if budget doesn’t allow for that extra money, then you won’t be disappointed with the Redington Vice.

Like, share, and comment below! Let us know if you have a favorite rod. Feel free to ask me questions, I’ll respond when I’m off the river!