The angling public has been treated to the new RIO Slick Cast fly line for a few months now, which means a lot of us have had time to really give this product a run for its money. I was lucky enough to get my hands on review samples of the line a month before it launched, so I’ve had a bit more time with the Slick Cast line to form an opinion on the stuff.

So, before you decide to spend the premium money that this line demands, read through this review first. 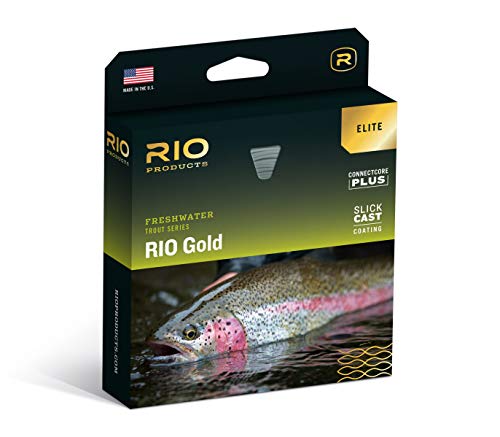 Gear manufacturers love to roll out futuristic-sounding names for their products, and I can’t blame them. It’s a great way to get folks interested in their stuff. As far as RIO is concerned, they’re pretty straightforward here. The Slick Cast fly line supposedly has the lowest amount of friction ever recorded in a fly line.

RIO tested their new Slick Cast coating against other industry stalwarts (they didn’t name names, but I assume that Scientific Anglers and AirFlo were involved) and determined this proprietary coating reduces friction and enables the line to shoot more quickly and efficiently. Seeing as fly casting is all about the transfer of energy, this is a pretty big leap forward if RIO’s findings are validated by in-field experience.

I’m partial to Cortland lines for a few reasons, but chief among them is their supple, quiet coating that doesn’t make a racket when casting. And while it’s not a scientific indicator, anecdotal experience tells me that quiet fly lines generally shoot further and cast better.

With both the RIO Gold and InTouch Trout lines that had the Slick Cast coating, I noticed a very similar performance to my favorite Cortland lines. The Slick Cast coating makes RIO’s lines a bit more stiff, but I have noticed largely reduced line memory as a result of that stiffness.

The Slick Cast coating is only available in the new Elite series of fly lines from RIO, but Slick Cast isn’t the only new feature that Elite lines have – they also sport a new ultra-low stretch Connect Core Plus.

RIO has touted their lines cores for years as a major selling point. Line cores that don’t stretch decrease line memory, and increase the feel an angler has when waiting for subtle trout takes.

While I can’t say that I’ve noticed some monumental difference between my old lines and the new RIO ones as far as feel goes, I certainly did notice every time a trout tried to abscond with my flies.

And finally, these new lines feature an improved MaxFloat coating that’s designed to – you guessed it – help your dry fly lines stay floating higher and longer. Just about every line company has their own version of this, and to be honest, I’m not sure it makes a huge difference.

What I can say, though, is that the Slick Cast lines I’ve fished for the past few months float high and stay floating. Time will be the ultimate judge here, but to this point, I believe the new MaxFloat coating has made a big difference when compared to RIO lines of old.

While I like a lot of what RIO has going on with the new lines, I’m not a fan of how stiff they feel. When fishing the 6wt line on a lake, one of my fishing buddies remarked that it felt like he was fishing with rope.

To be fair, after a few uses, it felt like I’d “broken in” the fly line, and the stiffness was worked out of the line. But it’s still stiffer than any other line I own.

That’s a good thing in some ways, because it allows for less stretch when fighting fish, and that should help reduce line memory.

The price is also going to be a sticking point for a lot of anglers. At $119.99, RIO isn’t helping to lessen the blow to our wallets that fly fishing creates. At the same time, though, this is their premiere line, so it’s priced accordingly. I just don’t know if I’d personally shell out the money if I could get something comparable at $80.

RIO has always produced lines with great tapers, and their enduring popularity shows that RIO lines satisfy plenty of anglers. The new additions they’ve made to their product lineup, with the Slick Cast technology and the Elite series of lines, is par for the course with what we expect from RIO – big steps forward in the line business.

The only two things that concern me are the price and durability. Price can’t change, and only time will tell how durable these lines are. I’m notoriously tough on line, and so far, these new RIO lines have held up. Hopefully, they continue doing just that.