I’ve long been a fan of fishing multiple flies. A few of my buddies even started calling me “triple-threat” a while back, because I’d always fish three flies on our local waters here in Utah. While three flies might be a bit excessive for some anglers, I think it’s critically important to understand how to fly fish with two flies.

Using two flies gives you so many more options and opportunities, and increases your chances at putting more fish in the net. And while that’s not the entire point of fishing, it sure does make the days on the water a lot more fun. 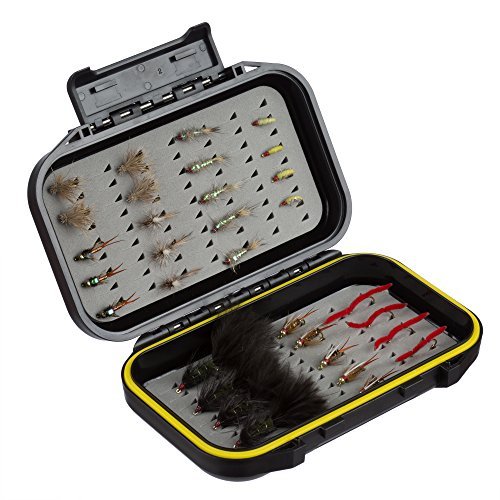 Why should I learn how to fly fish with two flies?

One thing that’s lacking in a lot of online fly fishing education, I think, is properly answering the why behind certain questions. It’s not enough to tell someone how to execute a roll cast – they need to know why we’re recommending a roll cast, how it works, and when to use one.

The same thing goes for fishing multiple flies. It’s not enough to tie on a dry-dropper rig and tell an angler to watch for a take. Understanding why a dry-dropper works so well is key to utilizing this technique in as many situations as possible.

For starters, you need to know a few things about trout.

First off, they eat most of their meals below the water’s surface. I’ve heard a lot of numbers thrown around over the years, but it’s something like 80% of a trout’s diet that’s subsurface. So, as much fun as it is to fish dries, they only represent 20% of a trout’s diet.

The logical step, then, might be to just fish two nymphs, right? Well, that’s not a bad option. But, it does leave out the possibility of fish feeding on top, and that’s the crux of why you want to fish two flies. Fishing two flies gives you the chance to present food to fish that are feeding in all areas of the water column – not just the surface, or subsurface.

Learning how to fly fish with two flies gives you more chances at catching fish, regardless of what, or where, they’re eating. If you’re serious about putting more fish in the net, this is a huge step towards doing so. Limiting yourself to presenting trout with only part of their usual diet limits how many fish you’ll ultimately catch – no matter how well-presented your flies are.

Key Takeaway: Fishing two flies gives you the chance to present food to fish that are feeding in all areas of the water column – not just the surface, or subsurface.

In addition to writing about fly fishing, I do a fair bit of guiding (for Utah Fly Guides and Quiet Fly Fisher, if you’re ever in the area). The biggest problem I see other anglers have with fishing two flies isn’t that they’re using more flies – it’s that they think about using more flies, and the inevitable tangles that will ensue.

Tangled line is part of fly fishing, and yeah, adding a second (or third) fly to the mix increases the chances you may end up tangled. But if you actively think about it, a bad tangle is almost bound to happen.

So, your first tip here is to not worry about fishing multiple flies. You don’t need to cast any different, nor do you need to fight fish or mend line differently. Fish just like you would if you were tossing dries. The rest all falls into place pretty neatly.

Key Takeaway: Fish just like you would if you were tossing dries. The rest all falls into place pretty neatly.

One of the first questions I hear when asked about how I fish two flies is what my rig looks like.

Rigging up for fishing two flies is pretty simple. All I do is take a piece of tippet, usually 15-20 inches long, and tie a clinch knot off the bend of the hook, like so:

And that’s it. You don’t need to worry about knots sliding off the hook point, or hooks bending out. I’ve been fly fishing since I could walk, and I’ve yet to lose a fish because the tippet my dropper was tied to slipped off the top fly, or bent the hook straight.

I’m including this in the rigging up section because it’s another question I get often. How do you know which flies to use when fishing with two flies?

I like to stick to a pretty simple rule: fish what’s in the water. On the vast majority of trout rivers, that’s going to be caddis or mayflies of some variety. So, if your dry fly is an Adams, you could throw a Hare’s Ear below it. Or, if you fish a caddis on top, a Frenchie or Pheasant Tail is a great choice. The idea is to have your flies match what’s in the water, and what fish are likely to see.

Most folks I guide are surprisingly good at picking up on the subtle movements of their flies on the water. This is an imperative skill if you’re going to successfully catch more fish on a two-fly rig.

When fishing nymphs below a dry fly, you’re looking for a lot of different things to tell you a fish just ate your nymph. But what all those things have in common is movement.

Even if you just see a fish open its mouth when you think your fly is in its general vicinity, set the hook.

Any movement at all is reason to set the hook, and more often than not, you’ll be rewarded with a trout on the end of your line.

Case-in-point: earlier this summer, I was fishing in Wyoming with a good buddy of mine. We were floating a side channel on a big river, and tucked up against the bank was a hefty brown trout. I only had time to make a quick cast and drift my flies for a few feet before the current pushed the drift boat out of position.

I tossed a dry-dropper-dropper rig upstream, and luckily got a good drift right in front of that brown. I watched the fish move slightly, open its mouth, and move back. The entire time, my dry fly didn’t so much as budge.

I set the hook anyways, and sure enough, that brown was hooked. It taped at just under 22 inches long.

Key Takeaway: Any movement at all is reason to set the hook, and more often than not, you’ll be rewarded with a trout on the end of your line.

Learning how to fly fish with two flies really isn’t that much different than fishing with one fly. The biggest change is that it demands more of your attention – you have to watch for movement, and be willing to set the hook on anything that looks remotely fishy. But rigging up, and even picking what flies to use, isn’t too far out of the norm for a day on the water.