Most fly anglers spend as much time organizing their fly boxes as they do tying the flies. Flies ranging from size, type, sub surface, or dry is a standard way to organize, but seasonality is just as important.

Seasons change and if you’re going to find success year round, your flies must change with the seasons. This can be especially difficult, however, when fishing months that have overlapping seasonal weather, like October and April.

Organizing your fly box based on the seasons requires an in depth understanding of insect entomology and fly patterns. Once you have the box organized and ready to go, however, this strategy is a fantastic way to have everything you need in one place, especially when fishing those seasonal overlap months.

Summer has us all thinking of big dry fly hatches, but no summer fly box is complete without plenty of nymphs and rubber legs.

Spring will see a few select dry fly hatches, but once the water turns to a torrent of chocolate milk, your best best is going back underwater.

Stonefly nymphs are best used in the early portions of summer, when the waters begin to clear up, but may still be high from runoff. Large trout will venture out from the deep waters and into edge habitat in between the deep pools and shallows. Here they will voraciously feed on these large nymphs as they make their way to the surface to become salmon flies.

Nothing can compare to being in the middle of a salmon fly hatch and thusly you should be prepared. To some, these giant flies signal the start of the dry fly season in the West.

You should have at least one row of these foam bodied giants in your summer fly box.

Hatches can be breathtaking, as the skies fill with hummingbird sized flies and when they do a feeding frenzy will ensue. Some anglers consider this official start to the summer dry fly season in the West. 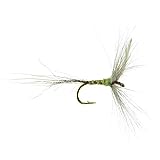 Green drake hatches will often overlap the last quarter of a salmon fly season and these equally large sized flies can change the feeding pattern on a dime. Make sure your rowe is filled with a mix of parachutes and spinners all in , or around, size 10.

After the salmon fly and green drake madness has subsided, pollinating insects will be out in full force throughout Western meadows. Honeybees and bumblebees make for a mouthwatering trout meal. Ants will also be out and moving around as well (no doubtedly trying to ruin someone’s picnic) and can also be used to entice trout species to the surface. Try a row featuring Moran’s Bees, Black Ants and Renegade Ants.

Caddis of all sizes are an easy go to for your summer flybox, but don’t look past having a row of  emergers as well. Often times, anglers will cast dry flies fervently toward savage splashing to no avail, only to find the fish are taking emerging caddis millimeters beneath the surface. 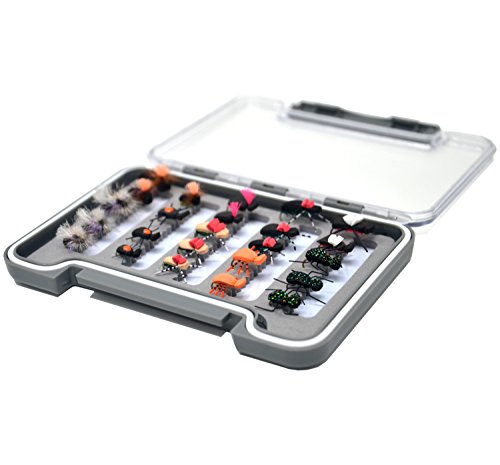 Hoppers of all sorts. Hoppers upon hoppers, the terrestrial season is finally upon you. Parachutes, spinners and Hank Patterson’s favorite a hopper dropper with a dropper hopper. The true beauty of summer fishing is starting the season with a giant dry fly and ending it with a giant dry fly.

Is there a better season to fish than fall? Fish have the option of being finicky with their flies in the summer, giving anglers the arduous task of finding the perfect fly for the pickiest of fish. With fall, though, comes desperation. Winter is approaching and the fish know it. The name of the game is caloric intake. Those less than perfect flies and presentations the trout turned their noses up at in the summer will be taken without hesitation in the fall.

If caloric intake is the name of the game, then smaller fish offer the most bang for the buck. Anyone who knows anything about fly fishing should be swinging streamers of all colors and sizes. For your best bet, however, few flies can beat the Clouser Minnow. Keep a row of these beauties for small mouths browns and everything in between. 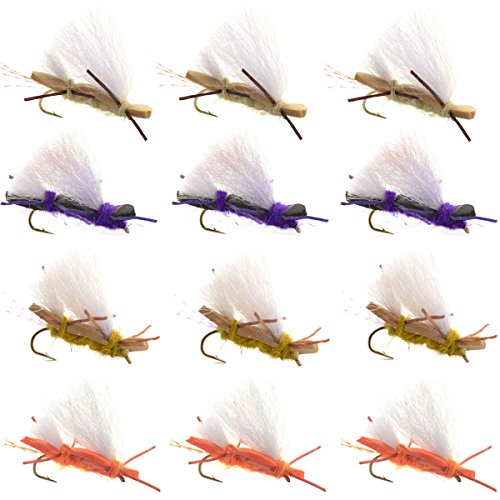 Big flies offer fall fish great calorie opportunities. Chubbies can also imitate several different flies at once, which is perfect for a hungry non discriminating fish. Make sure to keep several Chubby Chernobyls on hand at all times to imitate whatever strikes a fish’s fancy that day.

Shady wooded sections of rivers and creeks in the fall are home to fantastic spruce moth hatches. These parasitic insects wreak havoc on trees, but are a special treat for fall trout. A spruce moth day can be legendary in the West and to be without a Jake’s Richter Scale pattern in your box would be a mistake to say the least. The moths tend to fly well after sunrise and stay in the range of 14 and 16.

Caddis are another solid option when the temperatures cool off and the length of the days begin to fade.

Brrr. If you’re still on the water when the temperatures plummet, then good for you. Insect life this time of year is at a minimal and fish are feeling lethargic. Almost all your flies will be sub surface, but there is room for a few flies for special occasions. 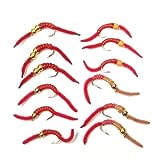 Some people call it cheating, but that’s only because it works so well. You can still count on running water to chip away at stream banks and for worms to be swept away in the water. Try keeping several rows featuring different colors, lengths and beaded and non beaded heads alike.

Was there any doubt here? Bead head nymphs are going to be your go to for winter months. You should have rows of princes in smaller sizes as the cold weather doesn’t create many large nymphs.

Midges make up most of a trout’s diet once the winter weather sets in and you should be prepared with sub surface midges like a zebra midge.

Sometimes the winter weather will subside just enough to allow for little hatches to happen. Recreating an emerging nymph heading to the surface is a must in these situations as hungry trout will be picking off the rare delicacy.

Wooly Buggers and other Streamers

Brown trout still need to feed in winter, even if it’s not as much as summer and fall. Wooly buggers and other streamers are best used in the deep pools where fish are laying. The cold water will sap their metabolism and energy levels, so in response your retrieve should be slow. That being said streamers are still one of your best options for catching nice fish during the winter doldrums and your box should be stacked with options.

You made it through winter and so did the fish. There is plenty of fishing to be done with weather and water temps rising, but before runoff occurs. Fish are in similar caloric need as they were in the fall, just for a different reason. Nymphs and rubber legs are going to make up the bulk of your spring fly box, but there needs to be space for a few special dry fly hatches out here in the West.

Fish are looking to feed to come back from the harsh winter and often won’t pass up the opportunity on a large nymph. If you are fishing a prince nymph, but keep coming up with whitefish or suckers it’s time to go bigger.

Make room for plenty of Pat’s Rubber Legs in your box. You can use this dependable stonefly nymph on its own, or with another rubber leg dropper, or your oversized prince nymph as a dropper. The rubber legs will be a key piece in your box for when water colors are starting to clear a bit after spring runoff, or as the water is rising into runoff.

One of the first official dry fly hatches to be seen in the West, filling a row with these stonefly patterns will pay major dividends when the hatch is on. You’ve waited almost six months for any sort of dry fly action, don’t be caught without them when that glorious day finally comes.

This hatch can be tough to time and the weather, along with blowout, can end it before it really starts. If you’re lucky enough to be on the water when the cloud of Mother’s Day caddis comes down, don’t be caught unaware. Like the fall and summer caddis hatches, however, you will want to save a few rows just for emergers, as fish are likely to key in on these as they make their way toward the surface. Even if the dry flies are popping like a pinata, there’s a good chance the fish in your river are locked into emergers as they are easy to pick off.

There’s never a bad time to have streamers in your fly box.

Spring can be especially good however as the waters warm and the fish begin to feed more actively. Hanging a worm, or Pat’s Rubber Legs as a dropper of your streamer isn’t even a bad idea for when visibility is at a minimum. This “sloppy rig” earns its name for its appearance, but can be your only viable option during runoff.

Have a great way to organize your fly box? Let us know! Cavan covers topics on hunting, hiking, backpacking, and fly fishing. Living in Missoula, Montana he has the great pleasure of engaging in these activities on a daily basis. He holds a degree in journalism from the University of Montana.