The 4-weight (4wt) fly rod might be one of the most underutilized sizes in fly fishing. It’s known primarily as a nymphing rod. But it can be used for so much more. We’ll break down some of the most common 4 weight fly rod uses for you.

Yes, the 4wt can effectively throw nymphs, especially of the smaller variety. But it can also delicately place that size-18 Adams right in front of a waiting Brook Trout. Or even throw a Wooly Bugger to a Largemouth Bass.

Whether it’s skinny water and farm ponds, or large lakes and freestone rivers, the 4wt has the capacity to catch whatever it is you’re after. And that has started to reflect in anglers rod choices as the 4wt has slowly built a strong following in recent years with more and more people switching over to the lighter set up.

We all remember walking into a fly shop to purchase our first rod. If you are anything like me you did little to no research and quickly became overwhelmed by the wall of rods sitting in the corner.

Luckily the owner of the shop came to my aid. And he handed me the classic American fly rod, the 9’ 5wt.

I used that rod for years and it served its purpose. But fishing for a while and borrowing smaller and larger rods from friends, it seemed the 4wt might have been the better choice for me.

I’m a fan of mountain stream fishing for brookies and the lighter set up with a shorter rod allows me to get back into those pockets where I can easily cast.

On top of that it also serves double duty as my bass rod. Originally, I thought that using the shorter rod and lighter weight would affect my ability to cast for land fish. But, really, I have felt no difference other than the increased fight of the fish.

So, when you’re at the store looking for your 4wt take into account exactly where you’re going to be fishing and how you’ll be doing it. If you’re on larger rivers, then a 10’ might be your best bet. The extra length will help you cast further and will allow you to get a better reach while nymphing.

Is it better than the 5wt?

The 4wt rod, usually second fiddle to its older more distinguished brother, the 5wt, seems to have the stigma that is best used for nymphing and nothing else. Which of course is not true.

But even if it was, why wouldn’t you want a rod that allows you to work nymphs?

And that’s where the 4wt comes into play. It’s perfect for presenting those smaller nymphs that can produce large quantities of fish, and with those large quantities you’re bound to land a few big ones as well.

Besides nymphing, as long as you’re not throwing abnormally large streamers, it can handle just about whatever you need it to handle. Not only can it cast flies with precision but it can land some of those 20 inchers that fishermen are always chasing.

Of course, the 4wt can handle those smaller fish that like to live in tight quarters. But what about those 16 inches or larger that like to lie in big freestone rivers. Will the 4wt have enough backbone to haul in some of those bigger fish?

Well the answer is a resounding yes. You’ll be able to fish it the exact same way you would your 5wt. or larger set ups. Drift your nymphs and dries past structure or eddies to lure out those big bullish brown trout. Or even throw wooly buggers to smallmouth hiding in the shadows. 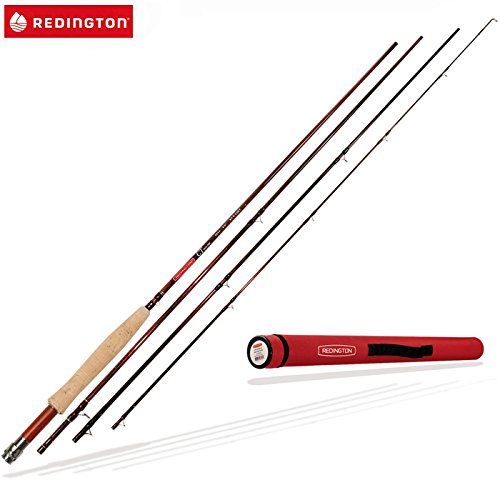 And once you see that indicator pause, or feel the bite on the end of a strip, make sure you give it a good hook set because you’re going to be in for a fight.

If you take a look at a map, you’ll find that there is an abundance of smaller water. Which begs the question: why wouldn’t you get a smaller set up?

Chances are, there is a nice creek or pond closer to you than a large river or lake. So why not take advantage of that and hit up the smaller body of water.

It’s here you can utilize that 4wt to successfully drift nymphs past brook, rainbow, and brown trout.

If fishing in narrow corridors, you can also pair this lightweight rod with a shorter length. A great size would be 8’-8’ 6”. But feel free to go as short as needed.

Not only are shorter rods more accurate, but it will help when you’re back in those tight quarters and there is no room for a back cast and you must bow and arrow or roll it into a spot.

If you’re fishing for Brook Trout  (and we all know how spooky they can be), having an accurate first cast can be the difference between catching a fish and scaring them off the pool.

So, if you enjoy this type of fishing then a 4wt is the perfect sized rod for you. You can present smaller nymphs, dry’s and streamers that live in these types of waters. And you have the ability to catch a large quantity of fish by doing so.

You’ll be able to work those tiny nymphs through plunge pools for trout. Or pop a dragon fly on the surface for panfish. You would even be able to throw smaller streamers for bass and maybe even catfish.

And if the bite is slow this works perfectly for presenting those smaller flies that works so well when the fish are being finicky.

As mentioned earlier, 80-90% of a trout’s diet is going to be under the water. And I get it, throwing dry flies is great fun and watching your line go tight when swinging a streamer is a rush. But if you want to go out and catch fish consistently, then you need to be nymphing.

The 4wt utilized with a longer rod, say around 10’, is perfect for working nymphs through long stretches of river. That extra length will allow you to drift your fly through the strike zone and will give you greater reach.

And the light feel of the rod will let you delicately place those size 22 zebra midges exactly where they need to be.

If you want to try out a shorter 4wt rod but don’t want to break the bank, then check out the Cabelas CGR Fly Rod.

The 4wt rod is something that all fly fisherman should get a hold of. It would even be worth arguing that a 4wt should be the first rod you should buy. It will teach you to properly work a fish and not horse it in.

This versatile rod can be used just about anywhere. Whether you’re on a farm pond catching panfish, or on a large freestone river looking for 20” rainbow trout. It has the capability to properly present flies the way that fish like and is strong enough to haul in just about any fish you can catch.

Have a 4 weight fly rod you love? Let us know in the comments! Dallas left the corporate world to pursue his passions of fishing and writing. Instead of spending his days working in Excel and managing supply chains he wades rivers and helps readers become better anglers.